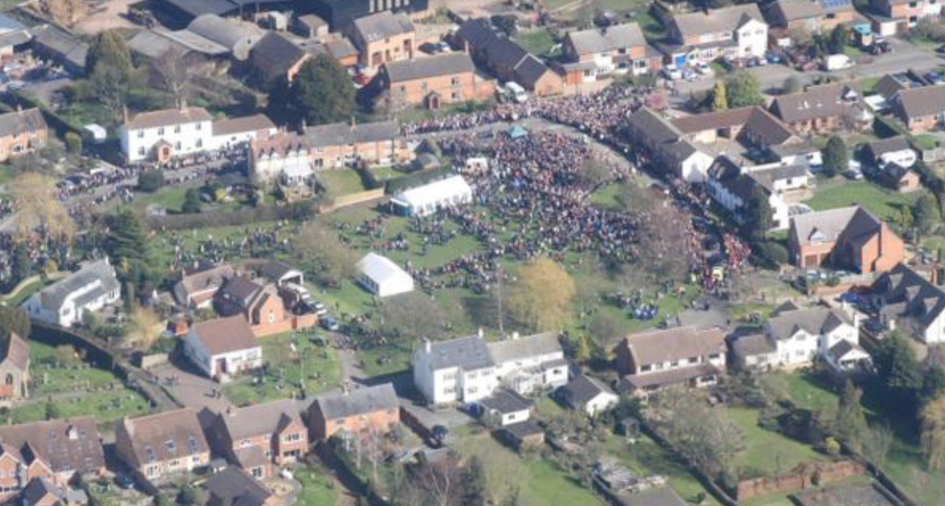 DADLINGTON – 1485 and all that!
By John Whitehead, Bosworth Battlefield Centre Guide and Dadlington resident.

Before the Battle
Dadlington has a significant role in the Battle of Bosworth story. Bosworth stands alongside Hastings, Naseby and the Battle of Britain as the four most iconic battles fought in England. The action on 22nd August 1485 brought to an end the struggle for power between the houses of York and Lancaster, known as the Wars of the Roses, and heralded the dawn of the Tudor dynasty.
Richard III, last of the Plantagenets, had been King for two years, having gained the throne after his brother Edward IV, who died in 1483, had been declared a bigamist by Parliament, prohibiting his eldest son Edward V from being crowned. Richard had a large number of enemies, including the old Queen’s relatives and all connected with the house of Lancaster. They persuaded Henry Tudor, a distant claimant who had spent 14 years in exile in Brittany, to bring an army of predominantly French mercenaries and take the throne.
Henry landed near Milford Haven and marched through Wales up to Shrewsbury gathering support before heading down Watling Street towards London (with approx. 5000 men).
Dadlington lies close to old Roman Road, known as Fenn Lanes, which linked Ratae Corieltauvorum (Leicester) to Manduessedum (Mancetter) and this is the route Richard III chose to take his army (approx. 12000), in order to stop the usurper. Richard camped the night before the battle near Sutton Cheney while Henry camped near Merevale.

22nd August 1485
The next morning Henry, knowing battle was inevitable, was advised to turn into Fenn Lanes and set up with a marsh protecting one flank. Amongst Henry’s retinue was the Lord of Lindley Manor who would have had detailed knowledge of the landscape. Richard brought his army down onto Redemore plain to give battle. From the low hedge on the north side of St James the Greater Church, Dadlington, there is a wide view encompassing the whole of Richard’s approach from Sutton Cheney to the Redemore plain. And from the Dog & Hedgehog car park you have a vista of the whole battlefield area.
A third army (approx. 5000) of the Stanleys (Lord Thomas and his brother Sir William) stood uncommitted on higher ground near Stoke Golding. Local legend has it that they had moved along the high ground between Dadlington and Stoke. Lord Stanley, who was married to Henry’s mother, Margaret Beaufort, had initially pledged to support the King but on the night of the 21st August met secretly with Henry in Atherstone and agreed to switch allegiance.
The battle, after significant artillery and archery, reached a stalemate in hand-to-hand fighting. Henry decided his smaller force needed support and led his cavalry across the edge of the marsh to make a personal appeal to Lord Stanley. Richard saw an opportunity to win, left his main army, and led his superior cavalry in a charge to intercept Henry. This is the last charge led by a King of England. As the two forces came together the Stanleys made their move, surrounding Richard and his knights. Richard, now fighting on foot, was offered a horse to flee, but refused, fought on and was killed by a deep wound to the back of the head.
During the later stages of the battle, Richard’s General, John Howard, Duke of Norfolk, was also killed, possibly at “Dadlington Windmill”, in a field known as Mill Field or Green Hill, close to Apple Orchard Farm. (The windmill is mentioned in an agreement concerning tithes in Dadlington made in 1479. It was described as a new windmill in the lordship. The windmill was demolished in the sixteenth century, with a chancery document dating from the reign of Elizabeth I revealing that by the 1570's the mill had been “taken down and sold to divers persons unknown the timbers and stones of the said mill by Robert Holte of Mancetter and his wife Katherine”. The land at that point was owned by Lord Ferrers of Chartley.  One of his ancestors a Lord Ferrers fought on Richard’s side and was killed at Bosworth).

The battle was relatively short, probably 9am to11:30am, with only an estimated 1000-1500 killed. But it proved to be a pivotal moment in history, the last day of the middle ages, the end of 331 years of Plantagenet rule, the end of civil war, the dawn of Tudors when England takes its place on the world stage. Henry Tudor was now to be King Henry VII. Henry and Stanley went up Crown Hill into Stoke Golding where Richard’s battle coronet was placed on Henry’s head in an unofficial crowning.
After the Battle
St James the Greater Church, Dadlington, is the only recorded burial site so far discovered for the slain from the Battle of Bosworth, the majority of whom probably would be Richard III's defeated men. This burial is supported by two sixteenth century documents, the Royal Signet Warrant of Henry VIII dated 24th August 1511 and The Chantry Confraternity which followed from the warrant.
We also have William Burton's "Description of Leicestershire" 1622 and John Nichols, county historian, in his "History and Antiquities of Hinckley" 1782, referring to this burial site at Dadlington. Discoveries of multiple skulls and bones were reported in 1868, circa 1900 and 1949. The latter was witnessed by local villagers including three still living in 2015. Much more detail is recorded in the booklet "A Church for Bosworth Field" by Tim Parry, available in the church.
Richard’s body was taken to Leicester and strung up for three days in the Church of the Annunciation before a hurried burial in Greyfriars Monastery. Subsequently, after the dissolution of the monasteries and a note recorded in 1612, the King’s remains and his memorial were lost.
Richard’s reputation was denigrated by Tudor historians and further ruined by Shakespeare’s portrayal in his play “Richard III”.
Over time the battlefield location was lost and later wrongly identified as being at Ambion Hill. By the quincentenary of the battle in 1985 historians had started making claims for several locations.

Lost Battlefield Re-discovered in 2009
Disputes about the location of the lost battlefield continued for 20 years. The battle was originally recorded on the 23rd August 1485, the day after the battle, in York City records as "The Battle of Redemore". Historian, Peter Foss, in his search for the battlefield, proved that Redemore was in the parish of Dadlington, by his discovery of the Hinckley-Lyre Agreement of 1283. This has been a key document in the search, and is detailed in "The Field of Redemore" by Peter Foss, published 1998.

The search for the battle site was conducted by Glenn Foard of the Battlefield Trust between 2006 and 2009, and confirmed as adjacent to a medieval marsh “Fen Hole” with the discovery of 34 cannonballs, the greatest number found on any European battlefield for the fifteenth century. The location centred on the meeting point of four modern parish boundaries, Upton, Shenton, Stoke Golding and Dadlington.

Richard III found in 2012 and re-interred 2015
The discovery of Richard III’s remains under a car park in Leicester on 25th August 2012 followed by DNA confirmation of the identity on 4th February 2013 was international news. The dig was inspired by Phillipa Langley and John Ashdown-Hill of the Richard III Society, an organisation dedicated to finding the truth about Richard III. Leading the dig was Richard Buckley of Leicester University Archaeological Department.
After much debate and a legal challenge, it was agreed that the King would be re-interred in Leicester Cathedral.
On 22nd March 2015 a cortege of the King’s remains travelled from Fenn Lane Farm via Dadlington, Sutton Cheney, Bosworth Battlefield Centre and Market Bosworth to Leicester Cathedral for a lying-in-state prior to re-interment on 25th March 2015. The police estimated that 5000 people were in and around Dadlington to witness the memorial service on the village green.
A mock trial of Richard III, charged with the murder of the Princes in the Tower, was held in a full St James’ Church, Dadlington and reported in The Guardian. The jury (made up of the whole audience) found the King innocent of all charges.


Brilliant scenes from the air of the crowds gathered for the King Richard III cortege calling at Dadlington 22nd March 2015.